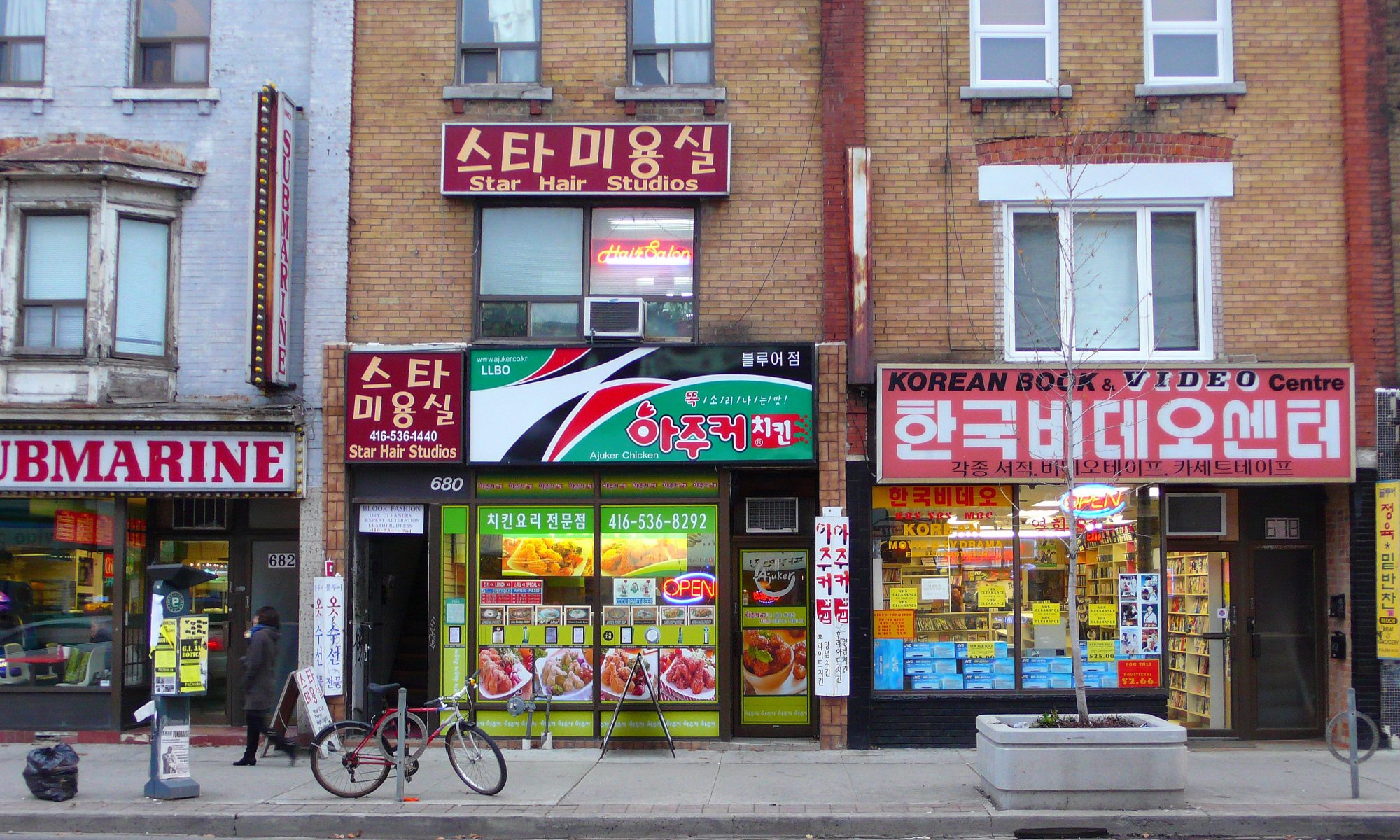 Recently, I came across this photo and it triggered so many memories. This picture was taken, probably 20 years ago, in Toronto’s Koreatown on Bloor St.

My parents often went to that Korean Book and Video Centre to rent Korean dramas on VHS. I loved going in there as well because they had K-pop cassette tapes. That store helped my parents stay connected with their motherland (South Korea). For me, it helped me appreciate the pop culture of the motherland, although K-pop wasn’t as globally famous then as it is today. Thank you BTS!

Just a couple of doors down from the book store was Annex Submarine. Peter, the owner, had several arcade games and his famous beef patty subs were amazing.

The picture of the two stores side by side, which seemingly contrast from a cultural point of view, is a type of visual representation of my life growing up in Canada. As a second-gen, I could feel at home both in a Korean video store and in a Greek owned submarine shop. But that feeling of “feeling-at-home” for a second-gen can be a fleeting and elusive concept. It certainly was for me.

Maybe I should start by answering what is a Second-Gen?

The term second-gen is the abbreviation of second generation, and in my case, Canadian. A second generation Canadian is someone who was born in Canada and has at least one parent or both parents who were born in another country and immigrated to Canada.

My parents immigrated to Canada from South Korea in the mid 1970’s along with thousands of other Koreans in search of a better life for their families. Post Korean War Korea was poor and opportunities were limited. So my mom and dad came to Canada in pursuit of a dream of seeing me and my siblings thrive and be successful in life. That dream fueled them to work 12 or more hours a day, 7 days a week for years. I am so thankful for them and their sacrifice for me.

But I have to admit, growing up in Mississauga where there weren’t many ethnic people like myself, and being raised by parents who perceived life through a different cultural lens than what formed my perspective, was super confusing. And this confusion often led to misunderstanding.

I was misunderstood at school. The cause of this was my appearance. Although my skin colour, hair colour, and eyes were different from most of my classmates, on the inside, I wasn’t much different from them. I loved Nintendo games and wore Reebok Pumps. I loved eating spaghetti and meatballs just as much as eating rice and bulgogi. But my classmates didn’t know that. They misunderstood me because of the way I looked.

I was misunderstood at home. The Korean culture with its confucian ideals coupled with an honour/shame culture, created a performance based scale of acceptance and identity. In other words, the Confucius/Performance mindset meant my parents were the brain and I simply had to follow what the brain told me to do and be who the brain told me I was. It was the Korean way. I bucked against this point of view like I was allergic to it. As a result, my parents misunderstood me because of the way I thought.

I feel like my childhood life was constantly being misunderstood which led to my feeling of not belonging.

But, there were times when I did feel belonging. Like a cold drink on a hot summer day, my desire for belonging and meaning was met, actually at church.

The thing is, I didn’t enjoy going to church for the religious stuff. I loved going because of the other second-gen Canadian Koreans who were there. We understood each other. We heard each other’s struggles. We joked and laughed about our parents. And we created that sense of belonging for each other. After church we rushed over to Annex Submarine and played arcade games, shared beef patty subs, smoked cigarettes, and hoped we didn’t get caught by our parents.

It felt really good to be understood.

But for me, that sense of being understood and the feeling of belonging, quickly faded away because I eventually went back home, to Mississauga, where my reality was in constant tension. Am I Canadian? Am I Korean? Am I both? Am I neither?

Eventually I went to university at the University of Waterloo. I was away from my second-gen Canadian Korean friends…

But you know what? I began to meet other second-gens from different countries. Not only that, I met white Canadians who loved hanging out with Asian Canadians like me. The girl I fell in love with, who is now my wife, was one of those people!

This was a very important discovery for me. One that helped me realize that belonging isn’t just something you experience when birds of a feather flock together. Belonging can be established and found even in the midst of diversity.

It takes intentionality. It takes a listening posture. It takes an attitude that seeks understanding.

And it dawned on me that finding belonging is like coming to a dinner table.

I love eating food. Especially food from different cultures. When sharing a meal with someone, I am sharing in the most basic thing we as humans need in order to live. Eating together is sharing life together.

The dinner table analogy is perfect for cultivating a sense of belonging. Because at the dinner we are able to…

I love being able to, not only share my story, but also hear other people’s stories about life and experiences. Stories expands my understanding of where others came from, of what drives them in life, and what makes them feel a sense of connection. Sharing stories enables the posture of listening that allows for one to be heard and understood. That is the seedbed for roots of belonging to grow deep.

Feel Safe to be vulnerable

The dinner table can be a safe space where deep and meaningful conversations can happen. It can be a place where we can share our highs and lows of the day and not feel judged or misunderstood. Finding that safe place and safe people to be open and vulnerable with is like finding treasure. The bounty is the sense of belonging.

They say laugher is the best medicine. I think it’s true. I recently went on a road trip with 4 other friends in an RV. There were moments on that trip where we would gather around the dinner table and just bust out in belly aching laughter. Those moments formed a deep sense of connection because we experienced this super incredible emotion together… Joy! Sharing moments of joy with others heightened that inner witness within our souls saying that we belong…

These feelings can cause each of us to ask the question…

Where do I belong?

The answer to that question can be as close as a dinner table with others we can share stories with, be open and vulnerable with, and laugh with.

So, whose coming for dinner?